The Minority Ombudsman also participated in the international conference organised on the occasion of the Hungarian Presidency of the Committee of Ministers of the Council of Europe, where she gave a presentation on the current trends in the protection of the rights of nationalities living in Hungary and the possibilities for further action. 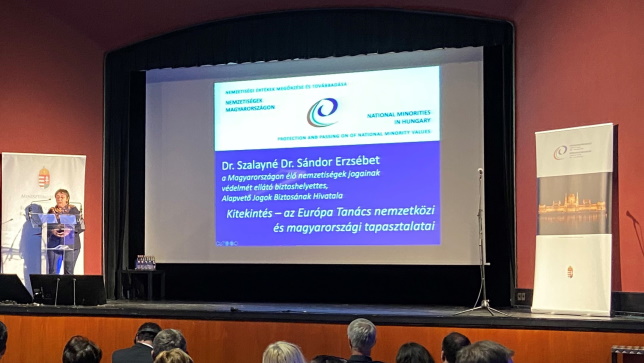 In addition to prominent international actors in the field of minority protection, the event also featured discussions on specific issues between the leaders of Hungarian nationality communities and high-ranking representatives of the political and policy fields.
At the beginning of her speech, the Minority Ombudsman underlined that "it is not necessary to be an expert to recognise that our unique and unrepeatable personality is an imprint of the interaction of our different gifts, mother tongues and traditions. Nor do we need any special skills to recognise the injustice of exclusion on the basis of origin, it only takes our humanity. Conferences such as this one, as well as the work of nationality advocacy and rights organisations, are essential to understanding such situations and to learning about the possibilities for legal protection."
With regard to the current situation of nationality rights, he explained that, based on traffic trends and feedback from professional partners, both individual errors of law enforcement and systemic maladministration can be observed in the enforcement of nationality rights. The specificity of the Ombudsman's legal protection is that, in addition to dealing with complaints, he has to pay particular attention to identifying legal and social trends and to developing the necessary professional proposals as soon as possible.
In this context, she pointed out that her work as Minority Ombudsman has also seen a significant change in the nature and type of cases in recent years. The former "classic" national minority complaints - in particular those concerning the participation rights of local governments, certain challenges in the maintenance of institutions or specific funding anomalies - have remained, but as a result of the effective advocacy and legal protection activities of nationality self-governments and advocates, the number of specific complaints has decreased, while the number of complaints raising general or systemic problems has increased significantly. These typically affect several communities or several nationalities in the same situation, which are particularly affected by, for example, the maintenance of institutions or teacher training, and go beyond individual redress, as they require continuous teleological thinking, professional concepts and openness to improvements.
Regarding the Roma nationality, she pointed out that sociological research shows that the situation of Roma communities, numbering around 650,000, has been different from that of other nationalities, with a specific perspective. Although they benefit from the specific rights of cultural autonomy as a nationality, they are less able to exercise these rights in practice because of the effects of the deep poverty, vulnerability and discrimination that affect them more than other groups in society. In the case of the Roma, therefore, in addition to the enforcement of nationality rights, equal treatment and the implementation of special equal opportunities programmes are still a priority, as a means of combating historical disadvantages and the often negative institutional discrimination they face.
Based on her general comments and her joint reports with the Commissioner in recent years, she has also highlighted a number of issues where progress has been made in recent years, but where further longer-term government action is needed to ensure a satisfactory resolution of the situation.